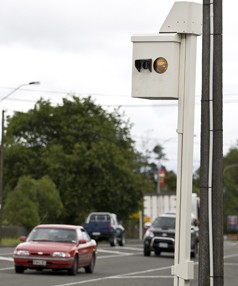 No radar detector can pick up the technology used in pole mounted (fixed) speed cameras, however GPS loaded models can warn you based on your GPS location.  The Escort 9500ixi and 9500ci, Passport MAX, and Stinger VIP all have GPS built in.

It’s worth noting that tickets issued due to speed cameras don’t generate demerit points.  The registered owner of the vehicle receives a ticket in the mail regardless of who was actually driving the car.

The older camera systems like the one in the image are slowly being phased out nationwide and will be replaced with a newer digital set up that covers more lanes and more cars in both directions.